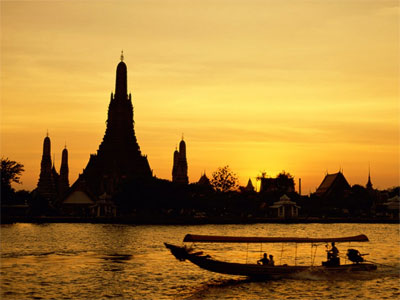 Run by TAT at various downtown multiplexes, this 10-day feast of film spans countries and tastes, with a major regional contingent. It’s date keeps changing from year to year.

A Ganesha procession and Hindu rites precede the dramatic Uma procession, passing dozens of petal-carpeted shrines around Silom and Sathorn, with fevered rites, blessings, mediums and self-mortification. To fit in, you should wear white.

When: 23 Oct 2010, 12 Oct 2011, 30 Oct 2012 . The rainy season officially ends, and with it the three-month Buddhist Lent, with wat rituals such as the shaving of monks’ scalps and brows. It’s followed by the Kathin month of robe giving and temple fairs.

When: 23 Oct , Where: Royal Plaza, Thousands gather to worship at his equestrian statue.

Run by the Nation newspaper, this major cinefest focuses on auteurship, Asian films and themes.

When: Oct or Nov , This week of cabarets, parties and events around Silom has faded quite badly, so ‘Pink in the Park’ at Lumphini Park pool and the closing parade may not happen in the future.

When: Nov,  Bangkok’s best loved fair rings Wat Saket for ten days around Loy Krathong. Other fairs during this period are less crowded.

Thai’s crowd waterways to cleanse sins by offering the water spirit a delicate, candlelit Krathong float made from banana tree trunk, leaf, incense and flowers. This is a magical night, with many temple fairs.

When: Nov , A charming mixture of modern and traditional performance at Santichaiprakarn Park and city venues. It’s partly free and fairly accessible to non-Thais.

When: late Sat in Nov Where: Shrewsbury International School Huge expat charity event with funfair, bars and shows run by the British embassy since the 1950s.

Full, half and mini-marathons are run through the old town.

When: 5 Dec,  The Thai people’s deep reverence for King Bhumibol is on display on what’s also Father’s Day (and a national holiday). The King addresses the crowds at Royal Plaza in the morning. Thousands light candles after dark in Sanam Lung, where fireworks, and traditional music and dance carry, on until late. There are decorations strewn along Thanon Ratchadamnoen and throughout the city.

When: 10 Dec Rites at Democracy Monument.

Concert in the Park

When: 31 Dec Say ‘Sawatdee phi mai’ at parties citywide, the Central World countdown or while watching the fireworks at Sanam Luang and riverside hotels. There are late bar hours and, a real help, the BTS/MRT run all night.